Arab food has always enticed the foodie in me and my chef husband for it sounds really exotic, so when we learnt about Indigo’s (low cost no frills airline) incredibly low rates on their inaugural flight to Muscat, we smartly planned a trip. Omani cuisine is different across the various regions and is unlike the traditional dishes of the other Gulf States. A daily meal includes a variety of soups and salads which are usually based around fresh vegetables, smoked eggplant, tuna fish or watercress. 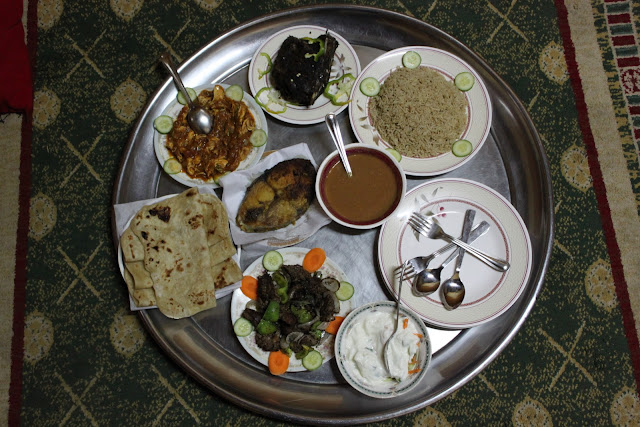 Our first stop that night was the Bin Ateek, which is a great restaurant for those who appreciate culture and tradition. It has a few floors, divided into private rooms, usually named after various places in Oman. Every room has its own TV and air con. Guests are seated on the floor, and food is brought on large traditional round trays to be eaten community style, just like at the home of any Arab. We literally ordered all the specialities on the menu. The star of the show was the “shuwa” which is lamb cooked for up to two days wrapped in banana leaves in an underground clay oven while marinated in herbs and spices such as red pepper, garlic, cumin and coriander. Being surrounded to the south and east by the Indian Ocean, the “Mashuai” made for a great choice, this fish is spit roasted and served on a bed of lemon rice is decadent to the core. Another indulgent dish is “Maqbous”, a saffron flavoured rice dish cooked over white or red meat. The other native curry dishes, based on various meats such as beef with green beans and potatoes or spicy fish in lime and coconut milk do not disappoint either. 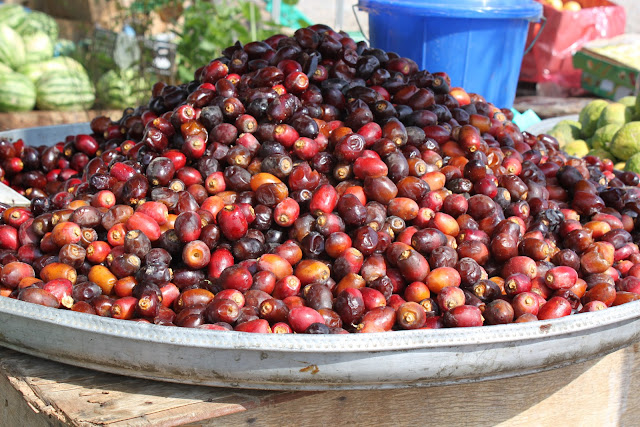 Dates have a significant presence amongst the Omanis and are valued for its social, religious and agricultural value; one would come across fresh juicy dates all over the country. “Lokhemat” aka deep fried cardamom flour balls, served with lime syrup; make for a traditional sweet ending. And to complete the meal, you cannot leave without trying a deep rich kahwa which is strong and bitter and flavoured with the ever popular cardamom. Another popular dessert is the halwa, a symbol of traditional Omani hospitality and is usually served in homes before drinking Arabic coffee. It is usually made by combining starch, eggs, sugar, water, ghee, saffron, cardamom, nuts and rose water from the Jebel al Akdhar in proportions and quantities known only to the skilled halwa maker, and cooked in a “mirjnl”, basically a large cooking pot used especially for halwa, for about two hours. This halwa can be preserved for more than four months without losing its quality. 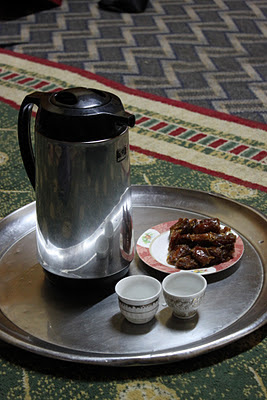 All in all given the natural hospitality of the Omani people, one is left with no choice, but to try everything on offer!

• The main daily meal is usually eaten at midday, while the evening meal is lighter.

• Main course has rice as the main ingredient, together with cooked meats.

• Breads rage from the plain to those flavoured with dates, sesame, thyme and garlic.

• Pork does not exist in the Omani diet as it is prohibited by Islam.