CZECHING OUT EXOTIC CUISINE IN PRAGUE

Prague is not just about its superlative architecture, cultural diversity, and past history; it’s also about experiencing some of the best Czech cuisine in the country. 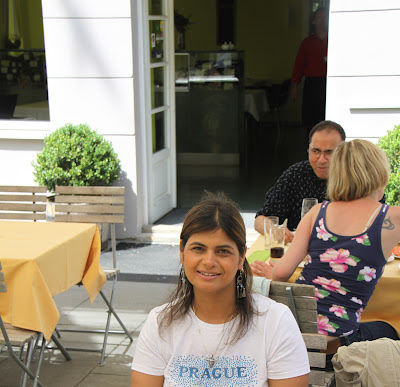 Let me make this clear at the onset that typically Czech food is Exotic but not diet food. So, if you happen to be in the Prague and want to enjoy traditional Czech cuisine then consider leaving your diet at home. Most dishes have an extremely strong emphasis on meat, pork being number one, with beef and chicken being seconds. However goose, duck, Trout, rabbit and wild game are also part of the menu. It is basically hearty fare or can be classified as comfort food too. Sample this, svickova -beef fillet served in a creamy juniper berry sauce, a hot goulash with bread or vepro knedlo zelo- pork, cabbage and dumplings washed down with a beer. This cuisine has been largely overlooked by the rest of the world and from my personal experience I feel some of these Exotic Czech dishes could just rule the world.

SOUPS
“There isn’t any dinner without a soup, it is our starter”. That’s what my guide Michael told me. Soups have a truly huge tradition in the Czech Republic, and there are loads of varieties. Bramboračka, is a kind of soup which is available in almost every restaurant in Prague. It’s a thick kind of soup with potatoes in it, with a light smell of garlic accompanied by vegetables like carrot, parsley and celery. Just when it is almost ready, mushrooms are thrown in it and it tastes delightful. Czechs make soups practically out of everything be it Garlic soup, milk, tomato or lentil and my list could go on.
MOST EXOTIC- Goulash
However the most exotic is the “Goulash” a rich beef stew, though not quite as spicy as its Hungarian counterpart and is eaten along with Knedliky the ubiquitous Czech bread dumplings, not noodles, potatoes, or sour cream. The authentic Goulash is made with beef but it is also made with chicken or venison as well as vegetarian varieties of the dish.

MAINCOURSE
Traditionally, the main meal of the day in Prague is lunch and it is based around beef or pork which is served with a choice of starchy side dishes such as dumplings, French fries, or other types of potatoes. Dumplings being the most common side dish which are normally made from wheat or potato flour, boiled as a roll and then sliced and served hot. There’s a sweet version of too called Ovocne knedliky meaning fruits dumpling. They can be filled with strawberries, blueberries, apricots or plums served with chocolate or sweet cottage. And this one is a main dish!! The excellent and refreshing Pilsner-Urquell can challenge any beer and is usually be served with Sausage and Horse-Radish, or the famous Prague Ham. 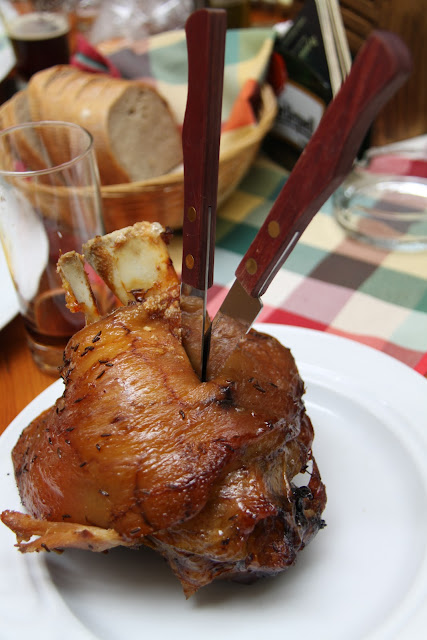 MOST EXOTIC-Pork Knuckle
The reputation of Czech gastronomy also comes from many other pork specialities, like the Jitrnice aka Black Pudding or the Moravske Klobasy alias Moravian Sausage. As for me I had seen a bunch of customers order a mini rotisserie which was a pork knee which looked amazing, a foodie that I am so I followed suit - it is one of the main local dishes around town and this exotic pork knee, marinated in dark beer is decadent to the core…a carnivore’s delight!


STREET FOOD/SNACK
I simply loved the Havelske Trziste, an open air market which was not very far from the old town square. Here I discovered several vendors selling everything from fruit to pastries to hot food. A must try is the ‘Smazak’, a hot sandwich of breaded, fried cheese (usually Edam) served with Tartar sauce. For those in between meals, there is nothing like Utopence aka pickled sausages (read marinated) that are fatty and a bit sour, typically piled high on a plate and served cold with raw onion (not to forget the beer of course). It’s the perfect snack. 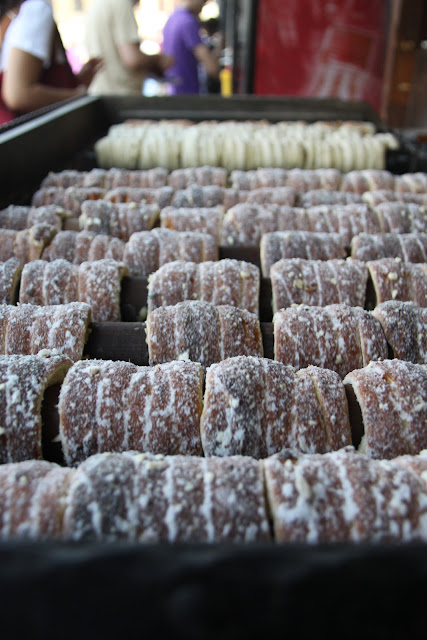 MOST EXOTIC- Trdelniks
Dough is wrapped around rotating wood or metal bars and roasted until its golden brown. Then it is rolled in sugar, cinnamon, and nuts.  Not too high in sugar, the flavours of the nuts and high-quality cinnamon simply stood out. 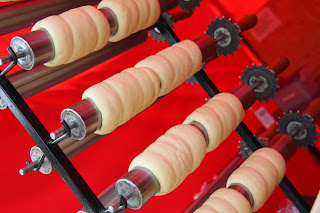 DESSERT
Most Czech desserts revolve around three things i.e. sugar, fruit and starch. The most popular being palacinka , a thin pancake – which comes in several variations involving fruits, jams, cinnamon with sugar, chocolate sauce and others. What caught my fancy were the strawberries and plums covered by butter, curd and sugar. I liked the version with cocoa instead of curd, even more. And yes, then there’s always good old zmrzlina (ice-cream!)
MOST EXOTIC- Medovník (meh-dov-neek)
A light, fluffy, layered Honey and cinnamon cake, there are variations in this one too. 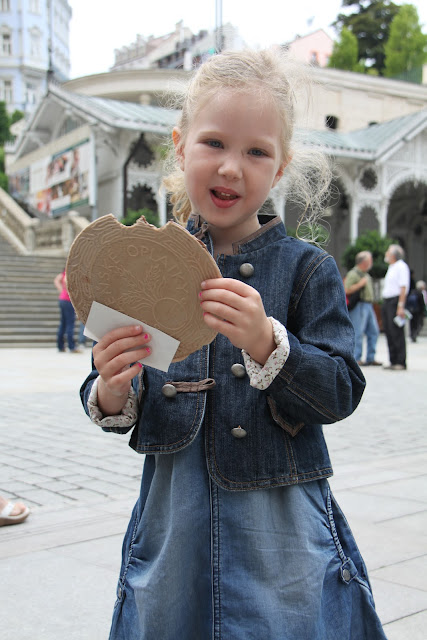 I cannot talk of Czech cuisine and not talk about the beer, which is the national beverage. My favourite dish with the Czech beer was hands down pickled ermine, which is a specific type of cheese, soft on the inside and covered in a thin white film….a foodie’s delight!

So like the Czechs I would say “Dobrou chut!” which means “Hope it tastes good!”