Visit the northern town of , which is located at the point where the Ganges spills out of the . A Gateway to the four pilgrimage of Uttarakhand, Haridwar is also known as Gangadwar, Tapovan and Mayapuri. 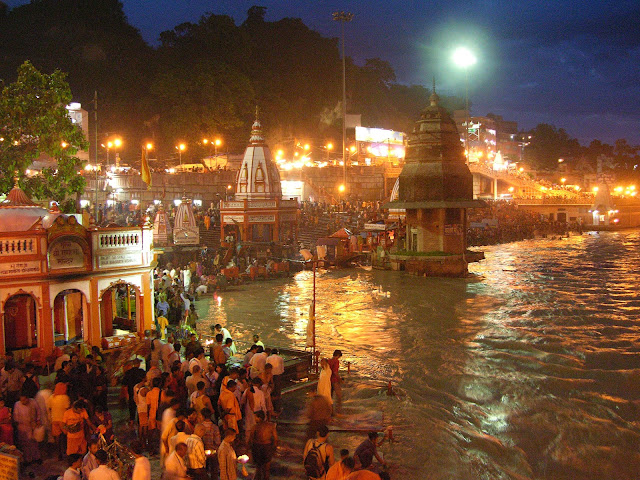 Probably right behind in “holiness” as many pilgrims come to Haridwar to witness “the footstep of Vishnu”, Chain links line the ghats because the currents at this part of the river are so strong, it is easy to be swept away. The town itself is a holy town and is crammed with pilgrims who come to bathe in the and float lit candles down the river as a means of offering. Interestingly, Haridwar is hot in the summer, but the water is always icy cold. The river is fed by melting glaciers and snow peaks. That doesn't stop multitudes from turning up on any given day to bathe in the waters. Truly, Haridwar is a city that signifies an arresting blend of Indian culture and spiritual beliefs. The Kumbha Mela here is a big draw and the next Kumbha-mela to be held here will be from February to May in 2010. 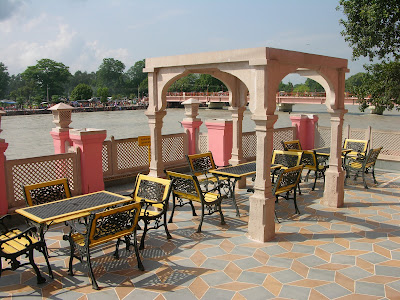 We had booked ourselves into Haveli Hari Ganga (also known as Pilibhit house), a mere 500 meters walk through the bazaar at the sacred ‘Har ki Pauri’. Hindus believe Haridwar was blessed by each member of Hinduism's great trinity, Shiva, Vishnu, and Brahma. They also believe that Shiva left his footprint in a stone that is now part of the Har-ki-Pauri Ghat (a section of a river that's used for bathing).We were given prayer beads to wear and lassi to drink on arrival and we had a room with a terrace which the lapped onto! The Haveli has been designated as a heritage property by the Department of Tourism, Government of India. The best part is the clean private bathing ghats, which is a first for a hotel in Haridwar. 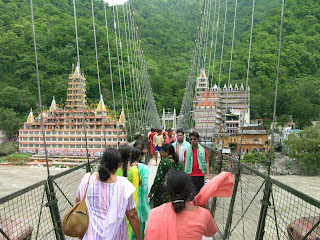 The next morning we awoke before sunrise to go down to the to watch the sunrise over the mountains. It was absolutely beautiful. We then hiked up a small mountain to Mansa Devi. It was about a 30 minute stair-master workout, but the views were worth it! Along the way, we were almost attacked by the numerous monkeys along the trail. We took cable cars up to the temples of Mansa Devi and Chandi Devi. These were high on a hill overlooking the town and the . Streams of devotees made their way through the temples, making offerings of flower petals and nuts.Other temples in close vicinity on the hill itself are the temples of Gauri Shankar, Neeleshwar Mahadev and Anjani Devi.


THE AARTI
Ganga Aarti is a riverside religious ceremony that takes place at sunset. The ethereal beauty of Ganga Aarti is an unparalleled vision. It is accompanied with chanting monks, symbols, flaming torches, drums, and trumpets. It was a grand production, and at the end Visitors and locals alike set large leaf boats filled with flowers and candles afloat on the river amidst the tangy aroma of incense. 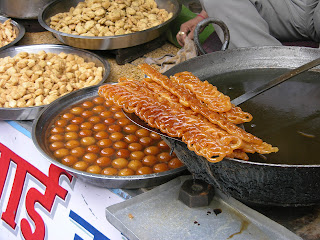 Strictly vegetarian cuisine is the order of the day. The street food is commendable especially the ‘Halwais’.The Karigar fries the Jalebis in his huge wok and it’s a wonderful sight to see his old hands moving with the speed of an expert. The samosas here are equally commendable, the mutter Ka samosas are delicious and very different from anywhere else. Do not leave without a meal at ‘Chottiwala’