Hines India celebrates Diwali with Food Trucks at One Horizon
In the movie “Chef,” the head cook at a Los Angeles restaurant quits his job and starts off a food truck – which aids him revive his hunger for cooking. It’s that urge that makes us such big fans of food trucks, and an answer to why the food truck festival at One Horizon Center in Gurgaon (a joint venture between Hines and DLF) at its premises has become a hot spot for its tenants these two days on the festive occasion of Diwali during office hours! It isn't a wonder why Hines has been rated as one of the Top 3 commercial buildings in the country!
Some of the food trucks featured at the Truck fest include Drifter’s Café which has on offer oriental favorites and box meals, Frugurpop with fruity and cream flavored popsicles (The Triple Berry, Frutilicious and Oreo and Cookies Cream Bar are selling like hot cakes), Something Saucy and What the Truck which is serving up sliders and fast food 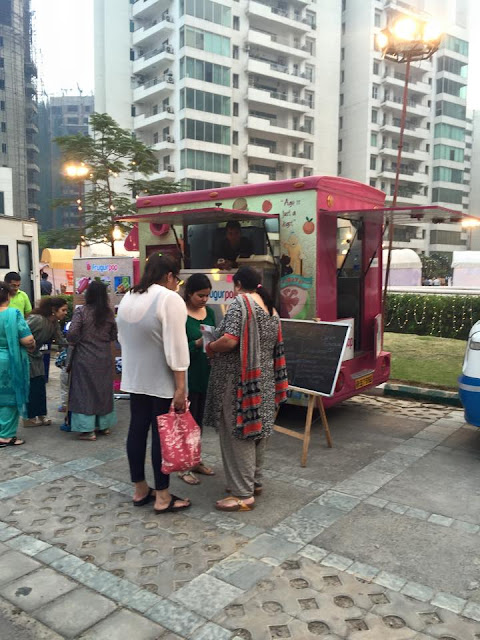 ‘Frugurpop only aims to get greater and enhanced and being encircled with the largest multinationals at One Horizon Center developed by Hines certainly gives the brand an exciting push! The coolness of the Popsicles echoes in the employees, who consume this revitalizing delight during their hectic day at work! The association surely lives up to our motto ‘Let Joy Take Over and reaches the highest floor of the tower,’ says Pallavi Kuchroo, Founder, Frugurpop 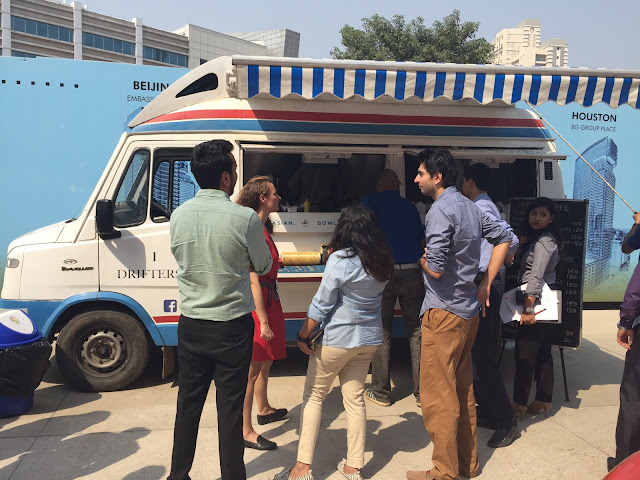 ‘Ever since we started our business we have been considering prospects to step into corporate parks and residential communities as we have intended our product for people on the go, nonetheless only Hines India gave us an chance as they saw food trucks being able to fill an instant prerequisite of food and beverage offerings to their occupants who look for hygienic, delicious and budget options,’ shares Ankur Gupta, Founder, Drifters Café candidly.
A food truck festival in my office or residential area...I would love that..wouldn't you? 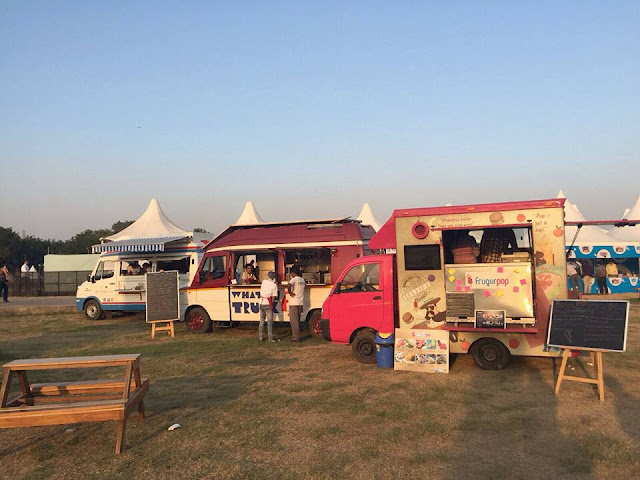 I GOT SWISSED @ TRIDENT GURGAON'S , CILANTRO 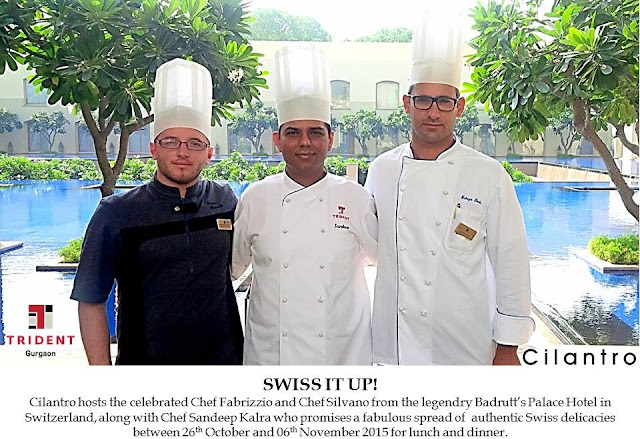 At Cilantro tables are large and well-spaced, covered with crisp linen tablecloths and voluminous napkins. Executive Chef Sandeep Klara is in attendance, as he always is and is ably assisting Chef Fabrizzio Renda and Chef Silvano Pintonello who have specially been flown in from the famed Badrutt’s Palace Hotel in St. Moritz. Going by the food history of Switzerland, the cuisine is vastly influenced by various regions like Spain, France, and Italy to speak of few.
I go for the tasting menu; I found a traditional dish from the Graubünden region on the menu ‘capuns’ (Yay!) , essentially a dumpling wrapped in Swiss chard the dish looks a bit small at first mind you, but it is actually really dense and quite heavy, smothered in a creamy cheese sauce.
Next was the Swiss Polenta, what makes it unique is addition of Buckwheat to the corn starch, topped with the cheese fondue and a hint of truffle….simply divine!
My favourite dish of the meal was one of Engadina style sliced pork, resting in a meadow mushroom jus thickened with wine, accompanied with Taglierini. The pork was superb and the mushrooms lovely, but the star was the sauce. This had stunningly deep mushroom flavour, creamy and perfectly seasoned. 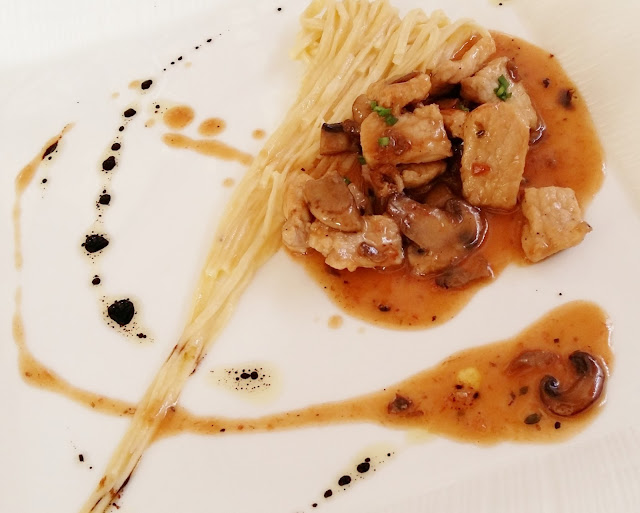 I would have been entirely happy if they stopped the meal at this point and left me with a saucepan of this and some plain bread. It was one of the finest sauces that I can recall eating, but of course the best dish was on its way!

Cheese figures prominently in many Swiss dishes, so for the cheese lovers, the fondue is enough to make you weep with joy. Here the fondue is ever so authentic, Gruyere, Emmental and parmesan cheese are melted with Kirsch a bit of dry white wine and some garlic flavour in an enamel pot in which you dip chunks of bread, chorizo, olives or whatever you fancy from the gamut of options offered. 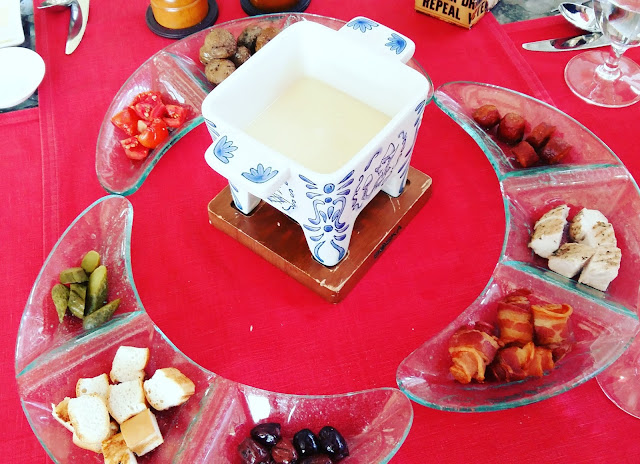 Indeed the fondue conjures images of alpine ambience and resonant yodeling and is practically an Institution in Switzerland. At this point the Apple strudel is brought to the table accompanied by a perfect quenelle shaped chocolate mousse topped with fresh red currants. 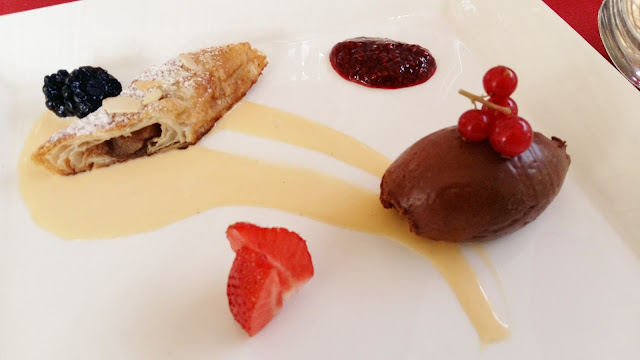 Ingredient quality here is impeccable, culinary technique faultless; service was, just as at my last visit, terrific. Basics like topping up of water, wine and bread happens effortlessly, but despite the traditional style of food for the Swiss food promotion the service was not overly formal, the stewards being friendly and enthusiastic.
FAST FACTS
Cilantro, Trident Gurgaon. 443, Udyog Vihar, Phase V, Gurgaon 122 016.
Tel: 0124 412 4307
Timings: Lunch - 12:30pm - 3:00 pm. Dinner - 7:30 pm to 11:30 pm.
Swiss Cuisine Promotion is on till the 6th November 2015…but the chef has promised to keep some of the dishes like the ‘Barley soup prepared Grison style’ on the winter menu 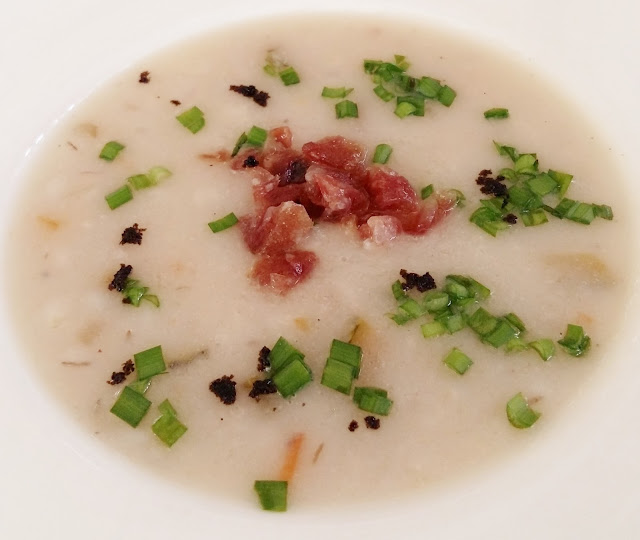