A PRIVATE DINNER AT VEDA WITH TOP FEMALE MICHELIN STAR CHEFS FROM ACROSS THE WORLD!!!

‘Rohit Bal requests the pleasure of your company to a private dinner at Veda, Connaught Place, with some of the top women Michelin Star Chefs from around the world on the 8th of September 2015, 8.30 pm’
So if a foodie family gets an invitation like this, what do you do? You confirm immediately and that’s exactly what I did too!!
THE BACKGROUND
Celebrity Michelin starred female chefs are in India this September to partake in a new initiative '40 Girls to 40 Chefs' that goal to support and provide prospects to underprivileged young women into a livelihood in the food industry. This is part of Creative Services Support Group's (CSSG) second edge of 2015 fixated on women empowerment - the Hospitality Training Project (HTP) - to provide them the chance for a significant vocation in the Hospitality sector. As part of this program, the young women have been enrolled in a set of culinary courses at a school in Delhi and will be subsequently employed in the industry through their partners. And what better way than to have eight of the finest women Michelin starred chefs from across the globe to come together and not just curate the most gorgeous and interesting food but, take on the responsibility to personally supervise, narrate and communicate applied training to the young girls as they board upon a new expedition in their lives. CSSG has also received support from the renowned Rohit Bal and Emmanuel Balayer who are designing the high profile charity dinners ( the likes of which have never been seen before – a first even on a global scale ) which will be hosted at the Four Seasons in Mumbai and The Leela Palace in Delhi. The renowned Opera Group – Divine – who performed at the Nobel Prize Banquet in Stockholm along with Damien Whitely, have entire heartedly reinforced the initiative and will be performing at the Dinner together with a Jazz performance. All in all, a great cause to educate the girls into becoming the handpicked of chefs at par with some of the best in the world.
THE DINNER AT VEDA 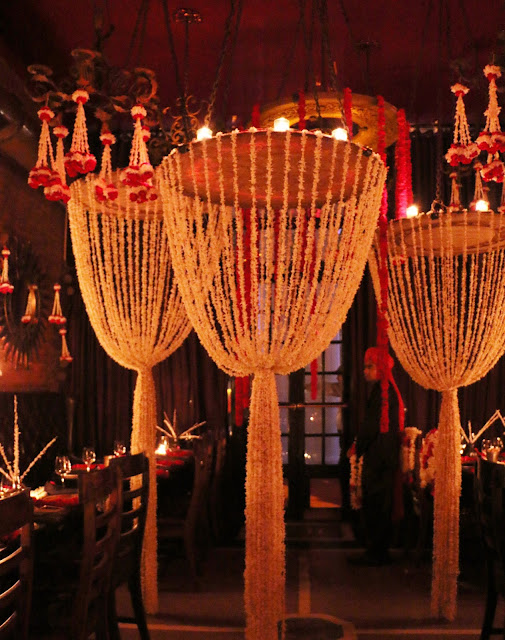 The talented Rohit Bal had worked his magic again to make Veda look special for the evening replete with ornate Indian flowers and planned soft lighting….and why not it isn’t every day that you get to host Eight Female Michelin Chefs all under one roof! - Ana Ros from Slovenia, Angela Hartnett, Frances Atkins & Lisa Allen from the UK, Anita Mu-Jiuan Lo and Carrie Helen Nahabedian from the USA, Lauren Eldridge from Australia and Sonja Fruhsammer from Germany…Kudos to Anand & Aditi Kapoor of CSSG.

It was a fun evening over conversation, good classical India food and wine, bonding with the Michelin Star chefs, Rohit Bal, Alok Aggarwal and his lovely wife played the perfect host. Also at the event were Ms Priya Paul and Sethu Vaidyanathan,

Magandeep Singh, Eminent food writer Reshmi Ray Dasgupta, Chef Bakshish Dean and the lovely daughter….culinary arts student Akanksha Dean, Kunal Addvant to name a few. The Opera Group ‪#‎Divine who performed at the ‪#‎NobelPeaceBanquet and Damien Whitely broke into an impromptu performance to thank‪ #RohitBal and his team for a fabulous evening at #Veda…absolutely Divine performance and a divine ending to the gorgeous evening!
I am looking forward to the Formal sit down Charity dinner on the 11th at The Leela Palace Hotel…an 8-course meal will be specially prepared by Angela Hartnett from United Kingdom, Carrie Helen Nahabedian from United States and Sonja Fruhsammer from Germany
Posted by Rupali Dean at 9/09/2015 10:59:00 AM 1 comment: Links to this post